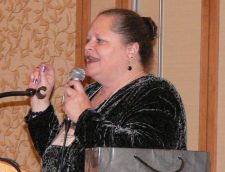 Jeannette Hay is the award-winning author of the book “Getting out From Under,
How To Break Free From Stress And Overwhelm To Get The Life You Have Always Wanted.”

Jeannette is an accomplished public speaker, a results-oriented coach known as The Overwhelm Coach, with over fifteen years’ experience as a Professional Organizer and is an award winning Animal Fine Artist. She is also a past chair of the Professional Organizers in Canada Toronto chapter and a 2014 nominee for the prestigious Harold Taylor Award.

For over fifteen years she has uncluttered people’s physical spaces as well as uncluttering their minds in helping them to overcome the overwhelming effects from stress while at the same time empowering them to live beyond their fears and have the life they have always wanted. Her success with her clients resulted in her writing down the steps and tools she has created over the years in her book so that more people can get out from under whatever they are struggling with to overcome.

Through her company, Get Me Organized! (www.getmeorganized.ca) she has helped her clients gain clarity and focus, using her time proven techniques. Helping busy business women to live a more successful and less stressful and fulfilling life has become her passion. She has coached, uncluttered, downsized and organized seniors, students and numerous business women executives running multi-million-dollar companies in their Toronto Bay Street offices.

Born in Canada, she left at age four and spent her educational years based in England. At age eighteen she moved by herself to live alone in Spain for three years before returning to Canada and enrolling in a Graphic Design Course at George Brown College in Toronto, Ontario.

Jeannette has also lived and worked in Massachusetts USA, Vancouver Canada, Hollywood California and Sydney Australia before finally putting down her roots in Ontario Canada.

Because of all those past adventures she has a great empathy for the often-overwhelming emotional struggles and challenges experienced by her clients.

Below is a list of some of her past speaking engagements and volunteer work.